During the presidency of Juscelino Kubitschek in 1956, Brasília began to be built in order to be the new capital of Brazil - which, at the time, was located in Rio de Janeiro.

Inaugurated on April 21, 1960, the current federal capital is now the center of the country's power, Heritage listed by UNESCO and home to more than 2,4 million people.

Oscar Niemeyer, a Brazilian modernist architect, was responsible for designing the most famous and iconic public buildings in Brasília such as the Cathedral, the National Congress, the National Theatre and, most recently, the Digital TV Tower.

Lúcio Costa won a competition to develop the architectural design of the city, creating what today is known as the city 'In the shape of a plane'.

The landscape architect Roberto Burle Marx sought to unite the modern architecture of Niemeyer with the region's native flora, based on the idea of ​​building a city in the midst of flowers and plants. The Crystals Square (Palácio dos Cristais) and the gardens of the Foreign Ministry building, known as Itamaraty, for example, are awarded works of Burle Marx. Worth a visit!

Another important Brasília name is Athos Bulcão. The artist is responsible for decorating the most important buildings in the capital with its striking tiles. Even Brasília International Airport received his mark. Here, his works can be seen in the restricted areas of Domestic and International Departures.

Discover the main attractions of Brasília with the help of these beautiful pictures by Daniel Zukko, producer and a friend to the Airport. All images are copyrighted.

Welcome to the capital of Brazil. 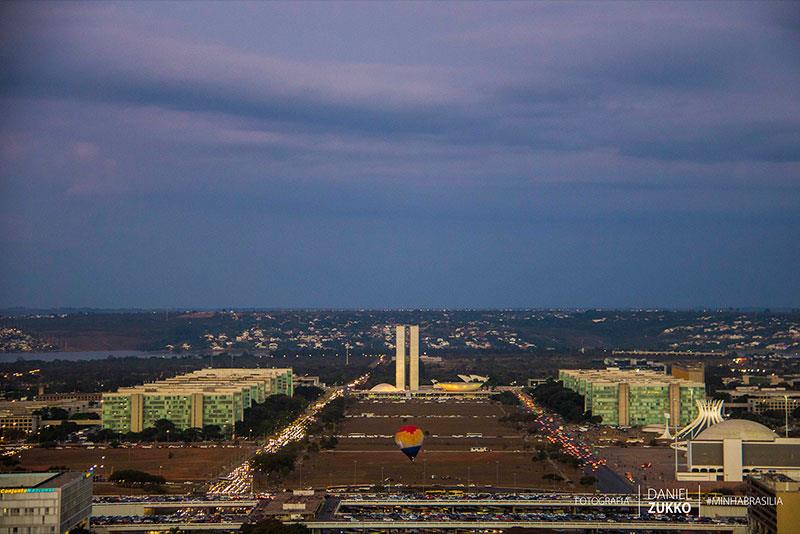 Monumental Axis
The Monumental Axis is the center of Brasília, popularly known as the "Plane Body" from Lúcio Costa. It has 16 km long, connecting the old Bus/Rail Terminal to the Três Poderes Square. Along this avenue there are several important monuments. 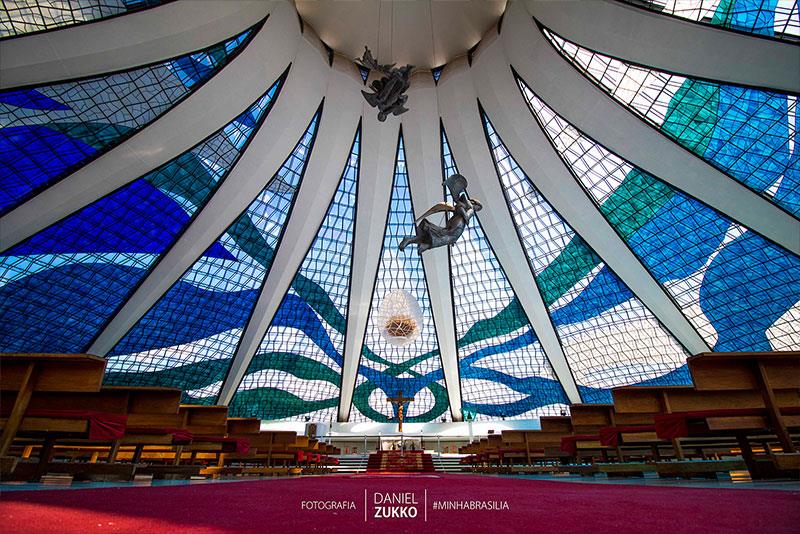 Metropolitan Cathedral
Inaugurated on May 31, 1970 and designed by architect Oscar Niemeyer, it was the first monument created in Brasília. The temple has stained glass in shades of blue, green and white, inserted between the 16 concrete pillars. Inside, on the banks of the Cathedral, there are the sculptures of three giant angels supported by steel cables. Outside, there is the tower of the bell, with four large bells donated by Spain. 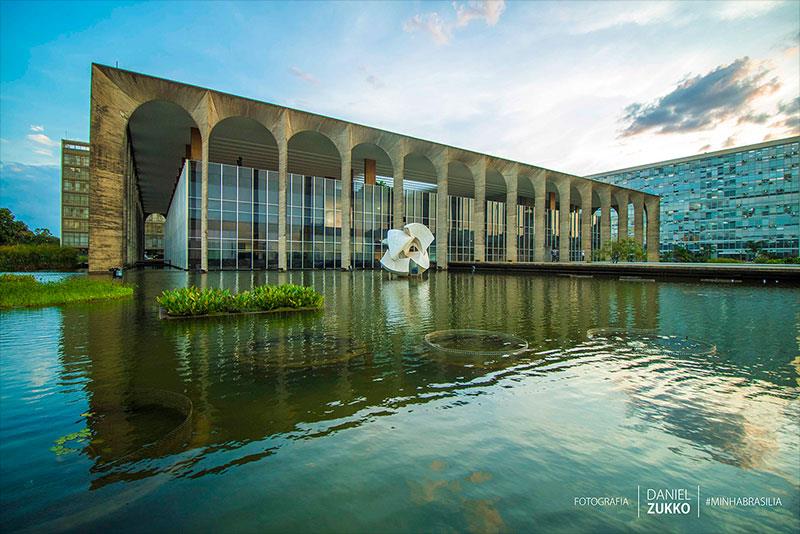 Itamaraty Palace
The Itamaraty Palace is the headquarters of the Brazilian Ministry of Foreign Affairs. Designed by Oscar Niemeyer, it was inaugurated in April 1970, and has the largest hall in the world without columns, with 2,800 m². Inside it, there are the famous gardens of Burle Marx with Buritis and plants of the Amazon. There you can enjoy various works of art as the canvas 'O Grito do Ipiranga ' of Pedro Américo, works by Cândido Portinariand Alfredo Ceschiattias as well as sculptures, silverware and huge Persian carpets. 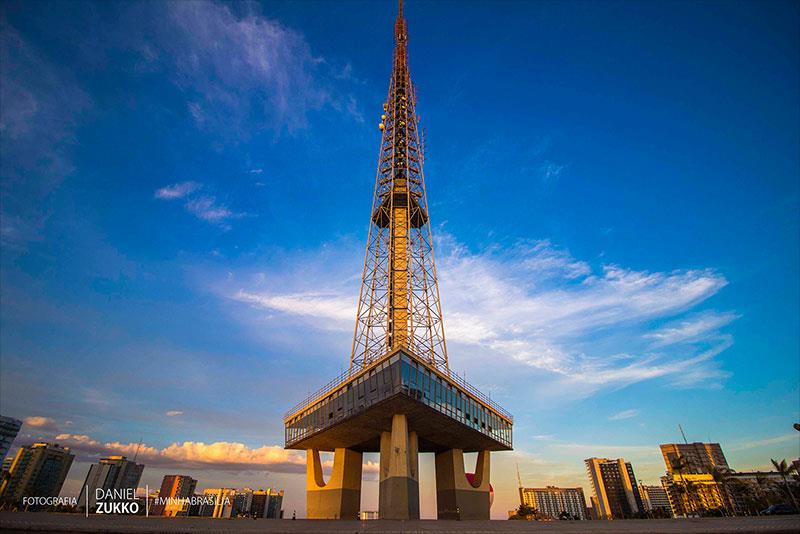 TV Tower and Digital TV Tower
The Brasília TV Tower was inaugurated in 1967 with 244 m tall by Lúcio Costa. From the top of the 75 m from its viewpoint, the work provides a privileged view in 360 of the city. A tourist complex around it provides a fountain of light with water and light show, besides the Fair Tower, which offers a choice of handmade souvenirs from the region.

The Digital TV Tower was the last project carried out by Oscar Niemeyer. Inaugurated on April 21, 2012, on the anniversary of Brasília, the work became known as the 'cerrado flower' and is located in North Lake, one of the highest points of the Federal District. It has two glass domes on the sides allowing visitation and the view of the city. 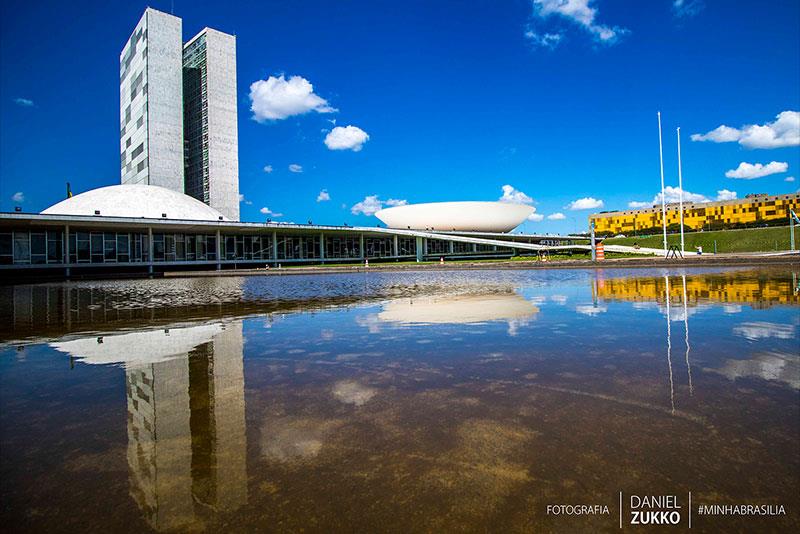 National Congress
The National Congress, designed by Niemeyer, was inaugurated with Brasília on May 21, 1960. Since then, it is the seat of the Brazilian legislature. Its iconic architecture has two twin towers in the center and two concave domes on either side. The smaller dome, faced down, is the Senate. The bigger one, facing up, is the House of Representatives.

Operation
Daily from 9:00 am to 5:30 pm [groups every 30 minutes]. To visit on Tuesdays, Wednesdays and Thursdays schedule through. 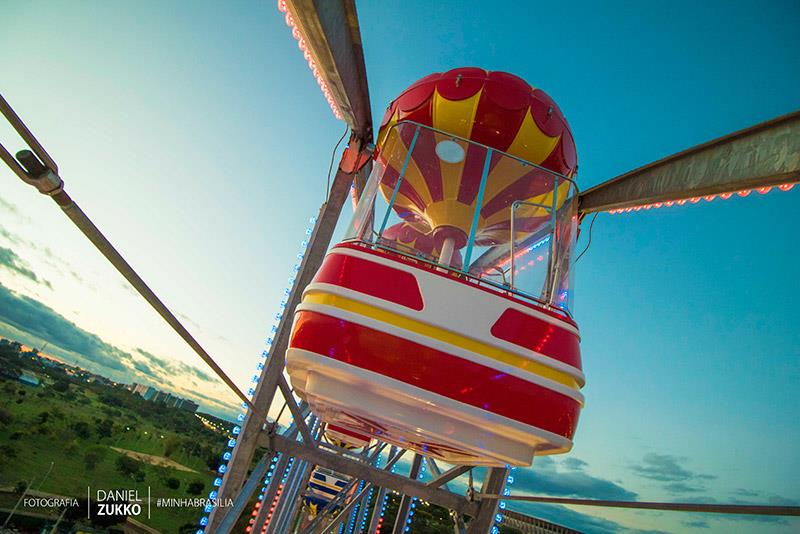 City Park
Dona Sarah Kubitschek Park, better known as the City Park, was inaugurated on October 11, 1978. It is one of the largest urban parks in the world and offers various leisure activities like skating rink and running, amusement park, kart, sports and restaurants courts. 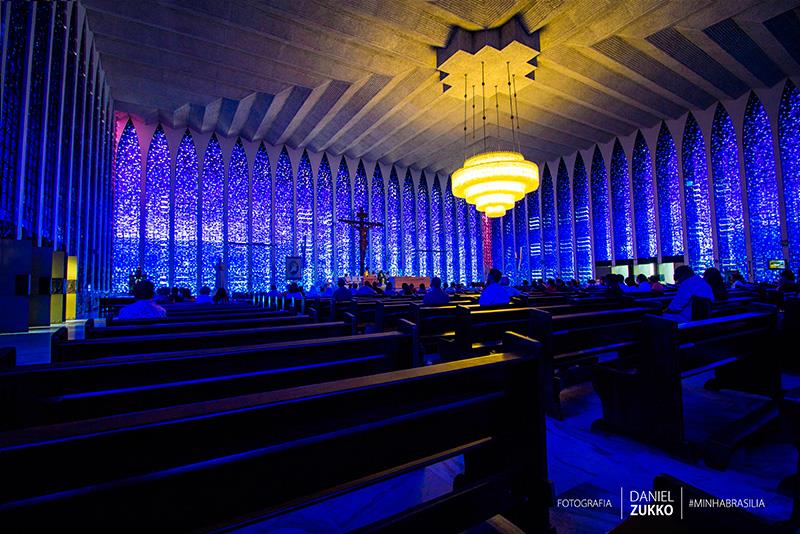 Santuario Dom Bosco
The church was built in honor of São João Melchior Bosco saint who became patron of Brasília by dreaming of the city still in 1883. The sanctuary has 80 columns of 16 m tall. Among them there are 12 stained different shades of blue. A chandelier 3.5m tall and covered with 7,400 pieces of Murano glass impresses those who first enter the site. 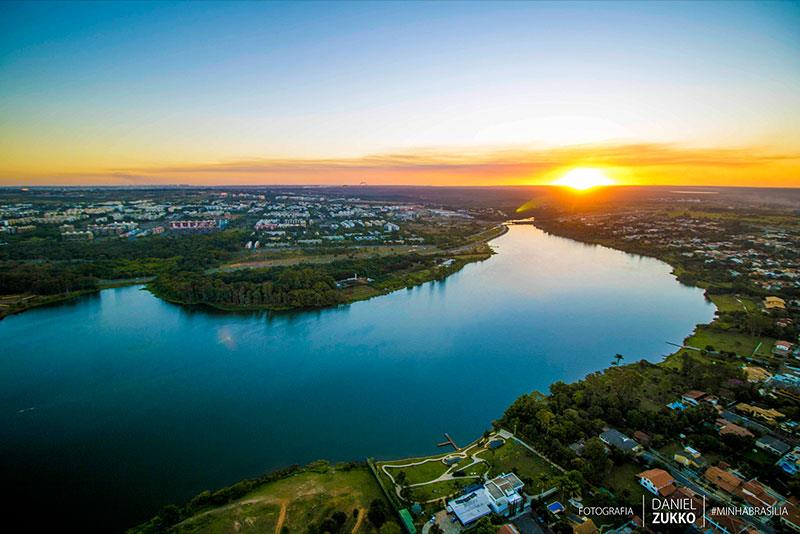 Paranoá Lake
The Paranoá Lake is an artificial lake created in 1959 to help alleviate the symptoms of drought in Brasília. It has 600 million cubic meters of water, 40 km long and 48 m deep.

Above the Lake there are three bridges, the most important being the Juscelino Kubitschek, inaugurated in December 2002 with 1,200 m in length. The architecture of the JK Bridge was chosen through a contest won by architect Alexandre Chan. The work is the winner of several awards and was considered the most beautiful bridge in the world at the 20th International Conference of Bridges.

You can enjoy various activities on Lake Paranoá as boat rides, Jet Ski and sports like stand up paddle, rowing, diving, among others.